Since my favorites haven't really changed within the past month, I thought I would do an empties post instead (which I've never done).  Besides, these kind of work as favorites because I don't think I would use up something I don't like! 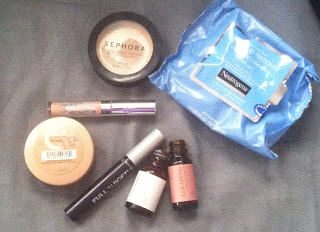 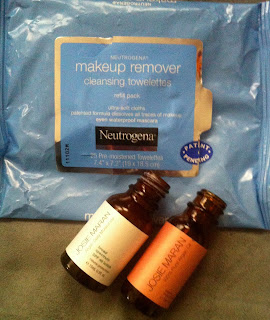 Neutrogena Makeup Remover Cleansing Wipes
Repurchase:  Yes.  I've been using these for ages.  They are really easy to use and effective.  I keep them on my bedside table.

Josie Maran 100% Argan Oil
Repurchase:  Yes.  I've been using this oil for a few years and absolutely love it.  It's so soothing and moisturizing.

Josie Maran Argan Daily Moisturizer
Repurchase:  Already have.  It is has a lovely lightweight texture, and is hydrating and gentle with broad spectrum SPF 40. 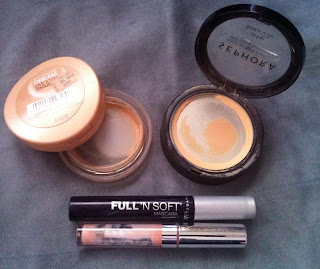 Maybelline Dream Smooth Mousse Foundation
Repurchase:  Yes.  I've actually repurchased this a couple of times.  It's a sponge-on foundation that gives adjustable coverage depending on how much you put on the sponge.  I sometimes go without concealer when I wear this because I can get pretty full coverage when I pat it on a spot instead of swiping it across the skin.  It feels light on the skin, and has a satin (not dewy, not matte) finish.  It does not contain sunscreen.

Sephora Mattifying Foundation
Repurchase:  I would, but they repackaged and may have reformulated this.  I decided to try some different pressed powders for summer, to see if they would control oil better than this for the warmer months.

Maybelline Full 'N Soft Mascara
Repurchase:  I think so.  I have a bunch of mascara samples to try, and I was thinking about trying the Maybelline Volum' Express Colossal mascara, but I've been pretty happy with the Full 'N Soft since it gives nice volume without making my lashes feel stiff or crunchy.

Anastasia Hydrafull Gloss in Lychee (a sparkling very light (almost white) pink)
Repurchase:  Yes, but most likely in a the holiday set the put out in November-December.  I've bought the set the past two years they offered it, and have actually used up three or four of the glosses in them (to finish a gloss is unusual for me!) which I think says a lot about the formula.  It is really smooth and slightly sticky, but very moisturizing, which is why I like it so much.  I use these more because I like the formula and not so much for the colors because they all look pretty similar on my lips.