I used my new Ariel palette from E.L.F. today.  I like this palette, and not just because it's got Ariel on it.  The shadows are pretty and shimmery, and they perform nicely.  The bronzers are quite pigmented!

Eyes: from the E.L.F. Ariel Treasure Within Beauty Book --
For Shore (shimmery bronze) on the lid
Siren Song (shimmery burnt orange) in the crease
Sand Dollar (shimmery ivory) under the brow and in the inner corner
Tropical Wave (shimmery teal) on the lower lashline 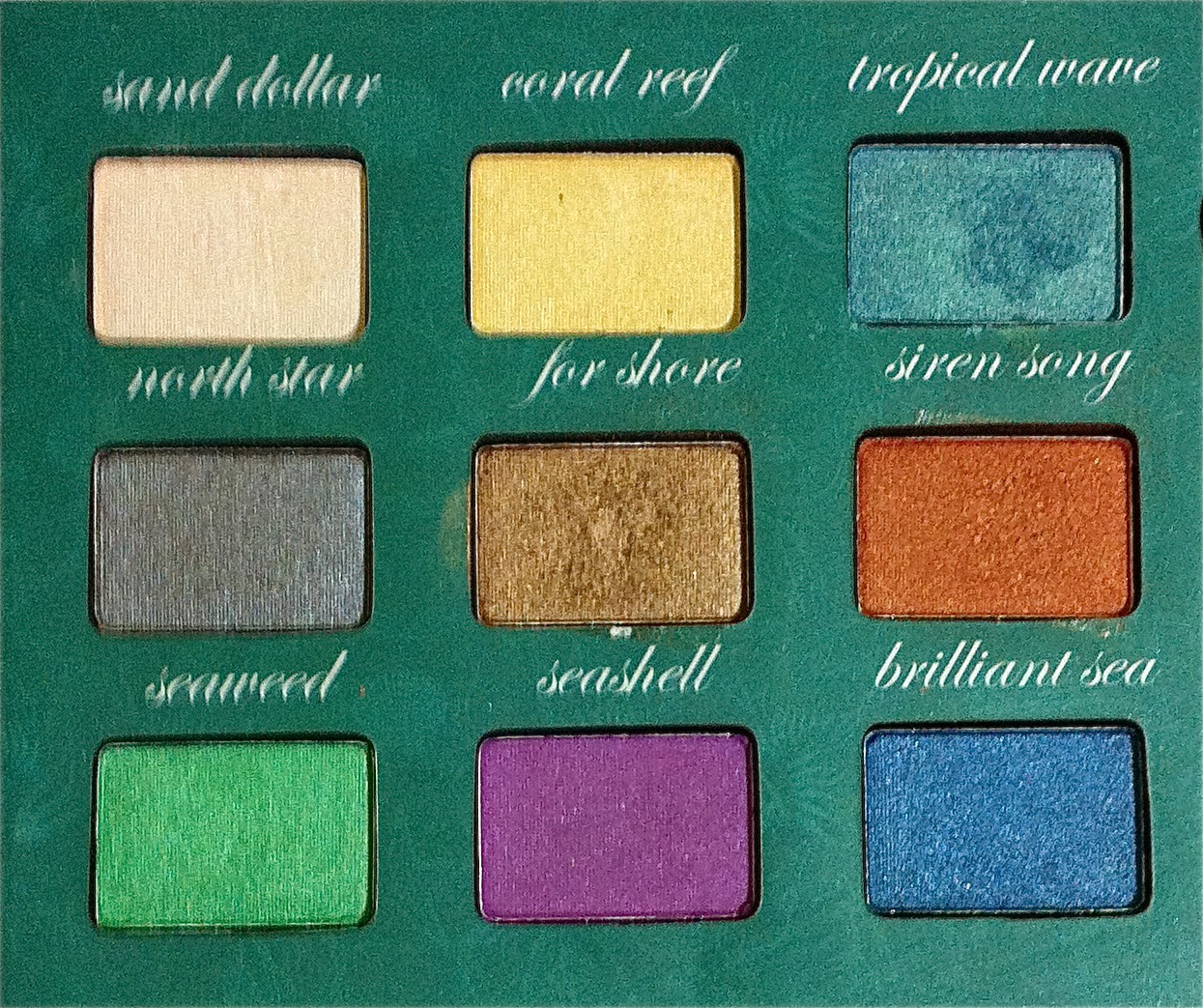 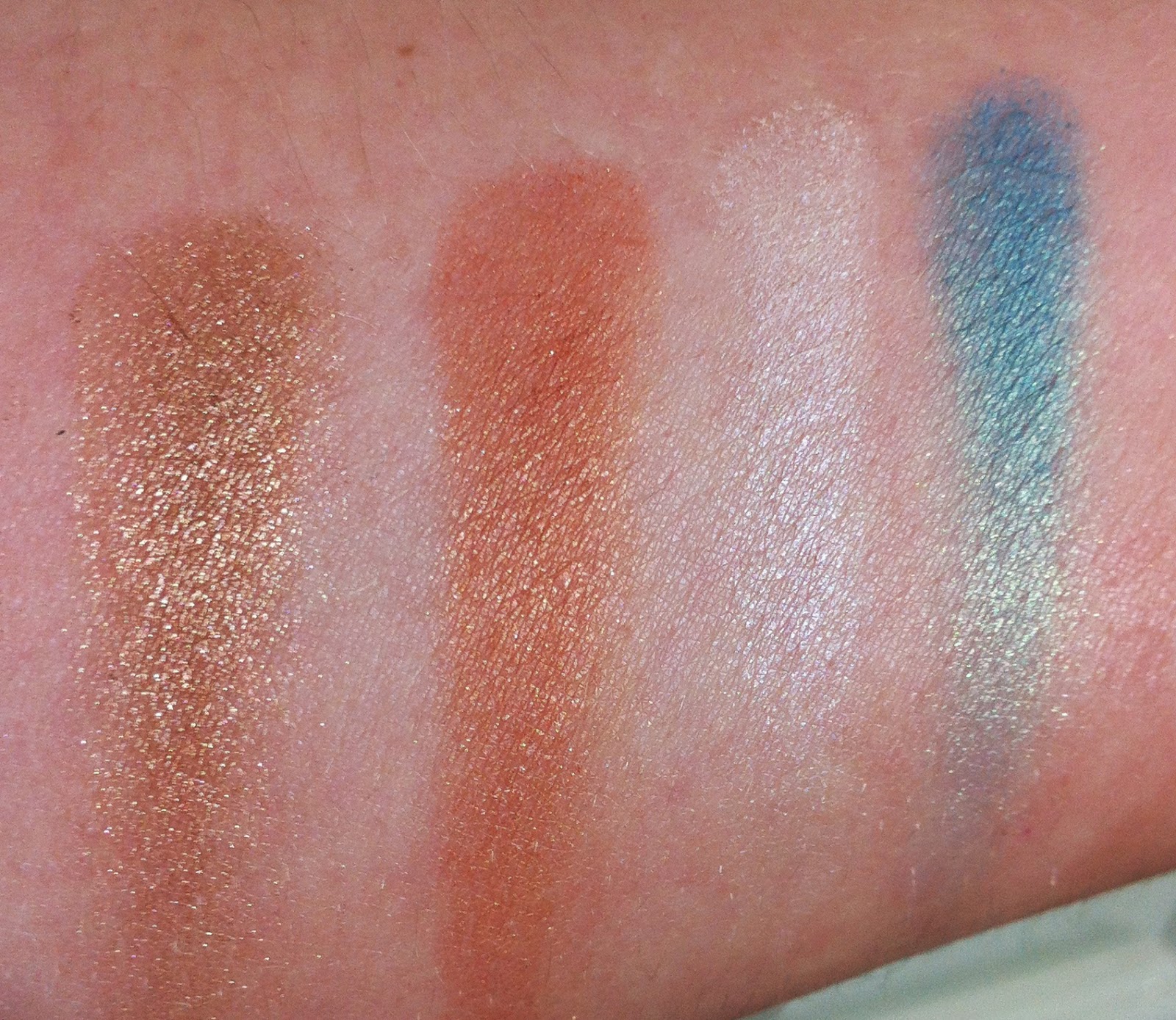 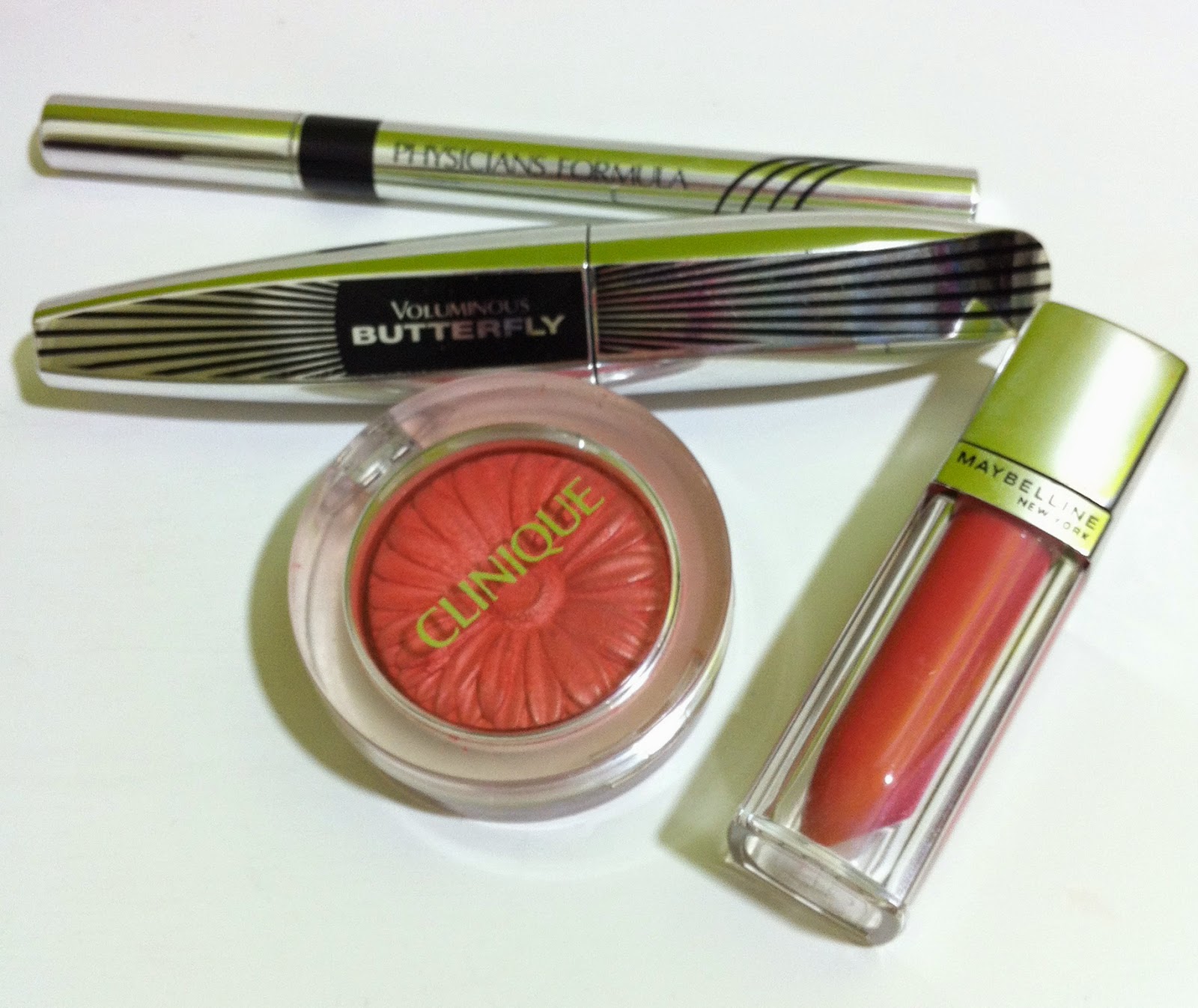 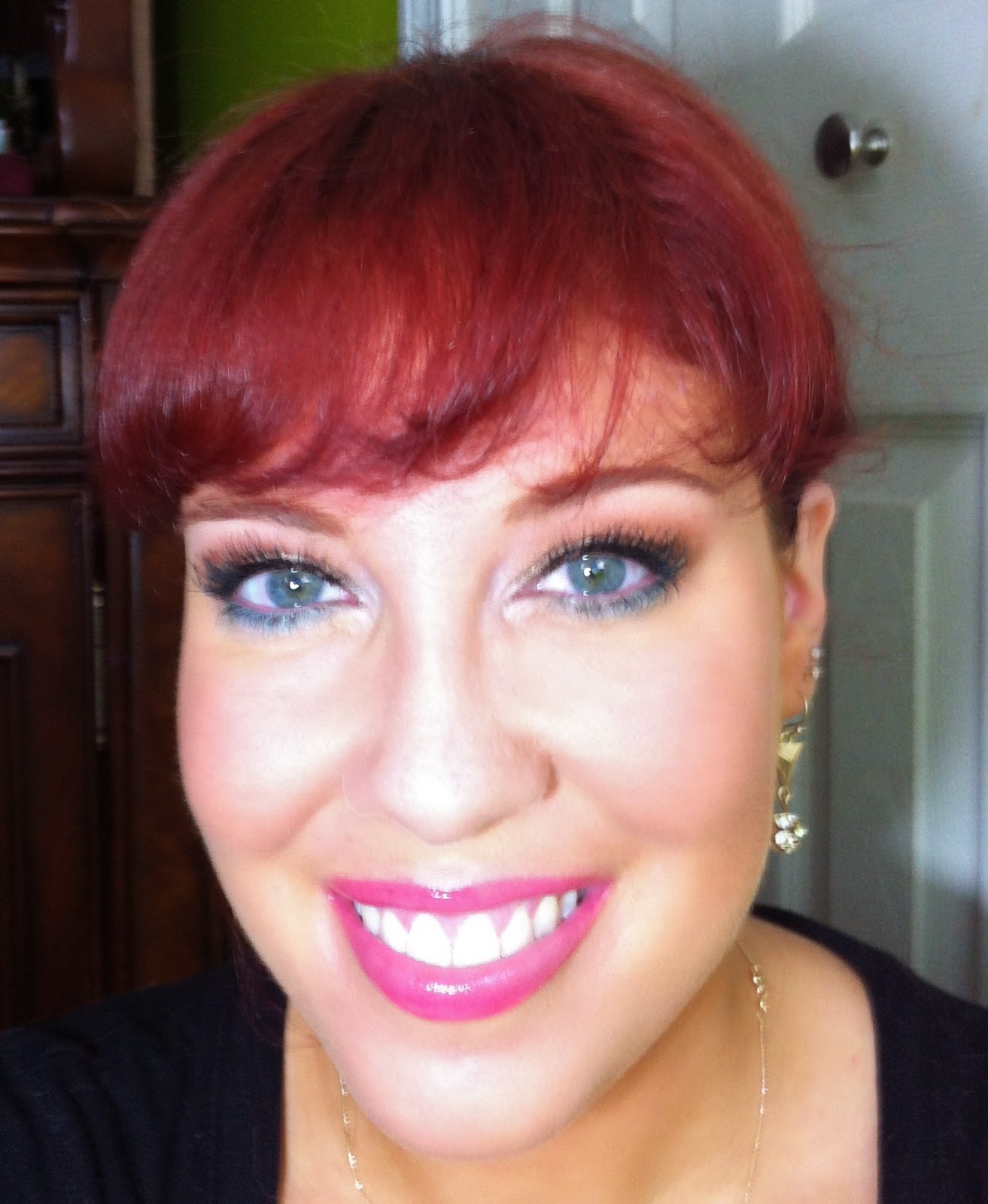 Fun palette!  But, does anyone else think "seashell" is kind of an odd name for the purple color? Although, now that I think about it, seashells do come in all sorts of colors.

Have a fantastic day, and thanks for visiting!
Posted by Ingrid at 12:39 PM 6 comments: 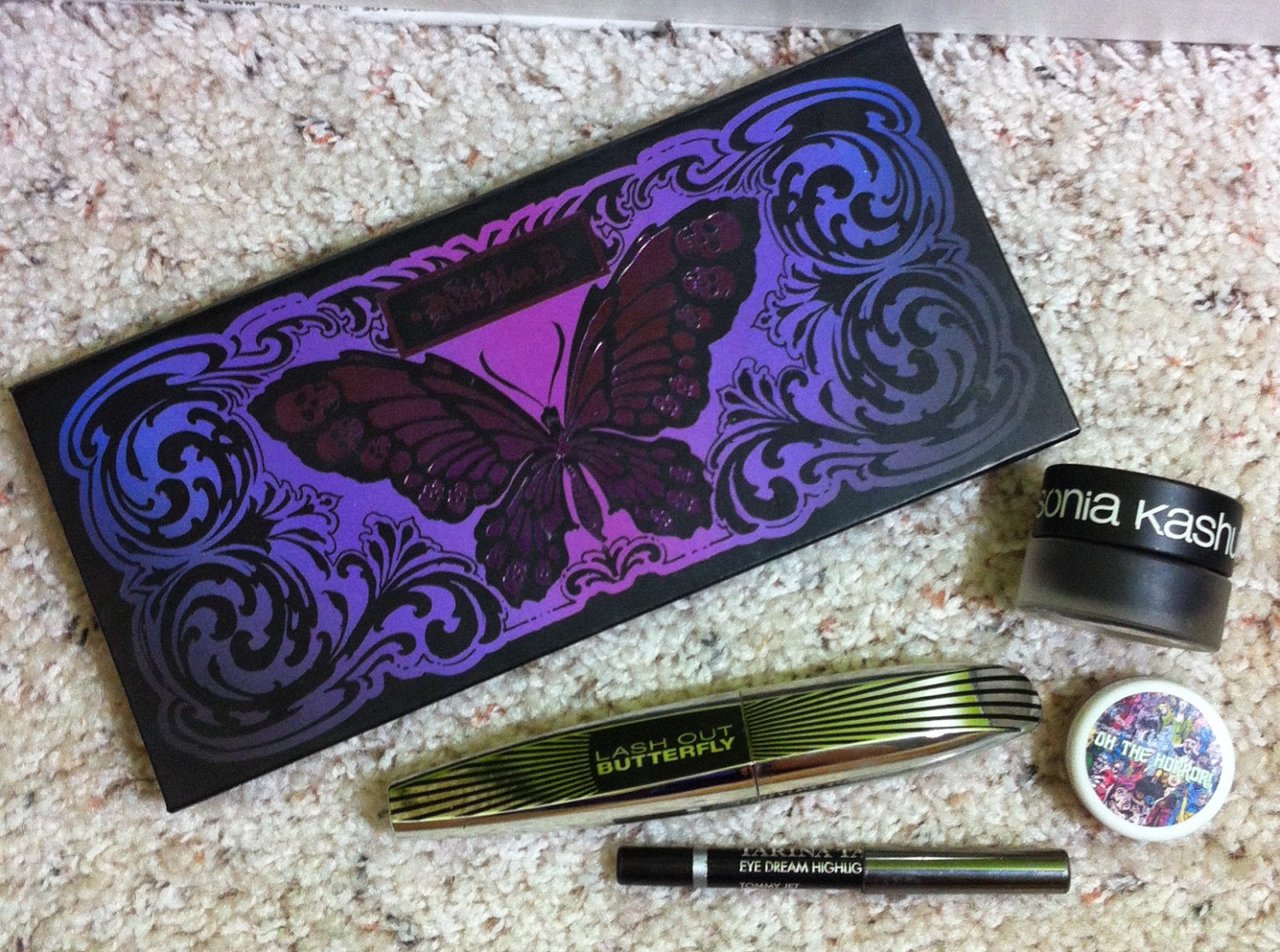 Blurry photos to show the sparkle:


I can't get over the gorgeousness of Here's Johnny.


And a couple of photos of the eyes with flash:

I liked this look so much, I didn't want to take it off!  But that's what's great about makeup.  You get to do it again the next day!
Posted by Ingrid at 5:40 PM 10 comments:

Who remembers the Benefit Show Offs!? 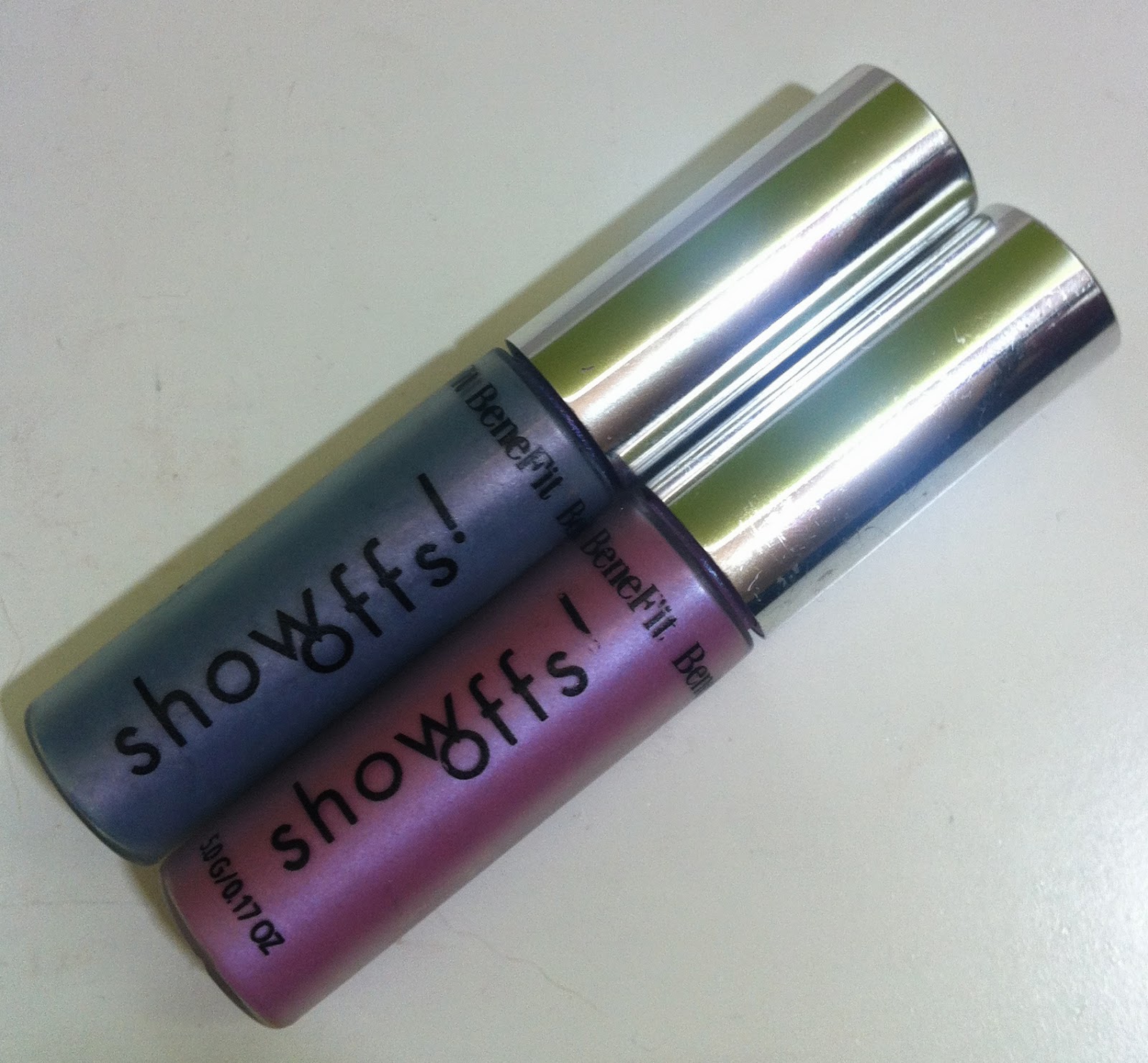 These are beautiful loose powder pigments. 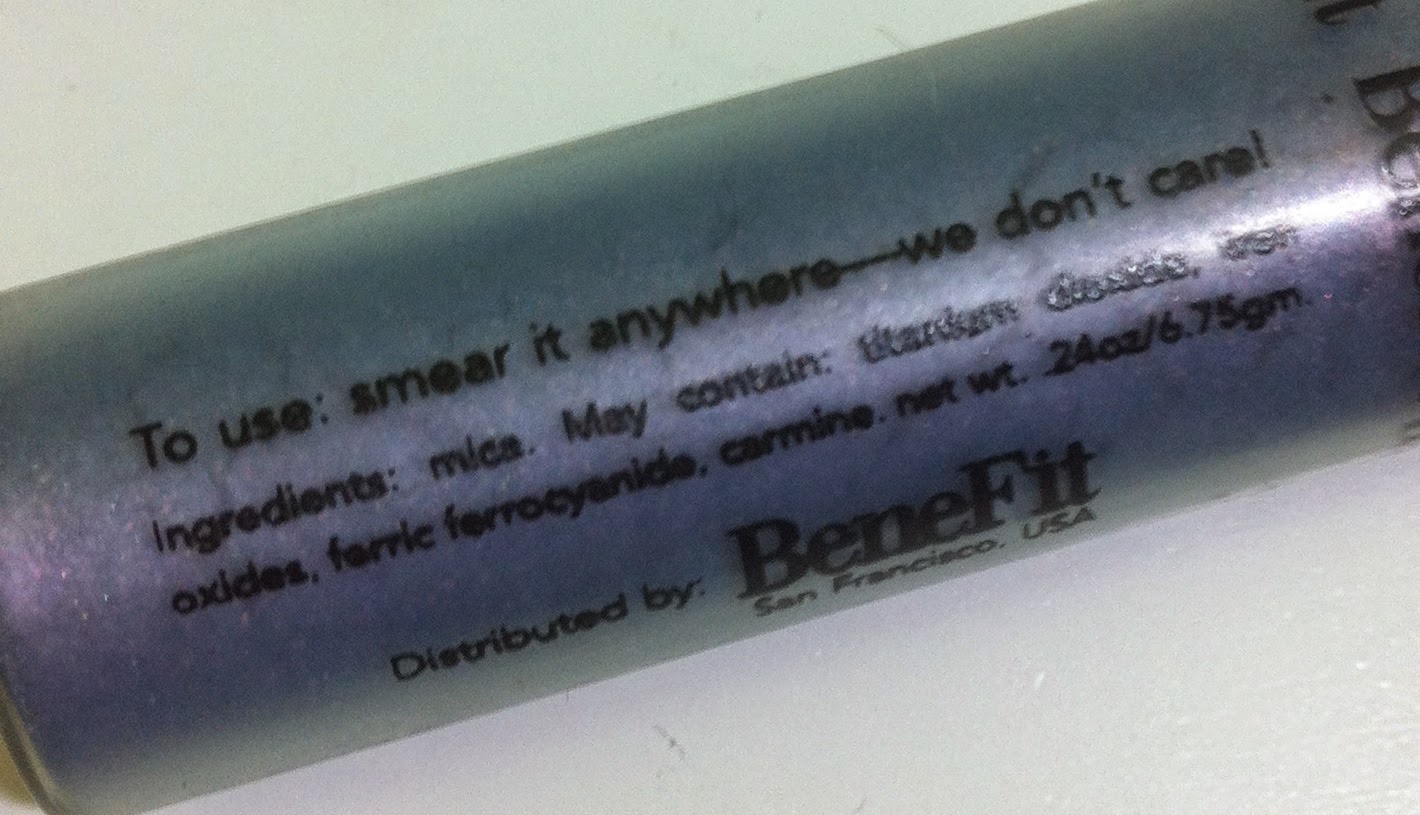 The packaging for these is pretty terrible.  The tube container thingy is about the same shape and size as a MAC lipgloss.  In other words, not a nice short, squat pot that is appropriate for loose powder pigments, but a tall and narrow shaped tube that has the tendency to tip over and spill the contents everywhere. 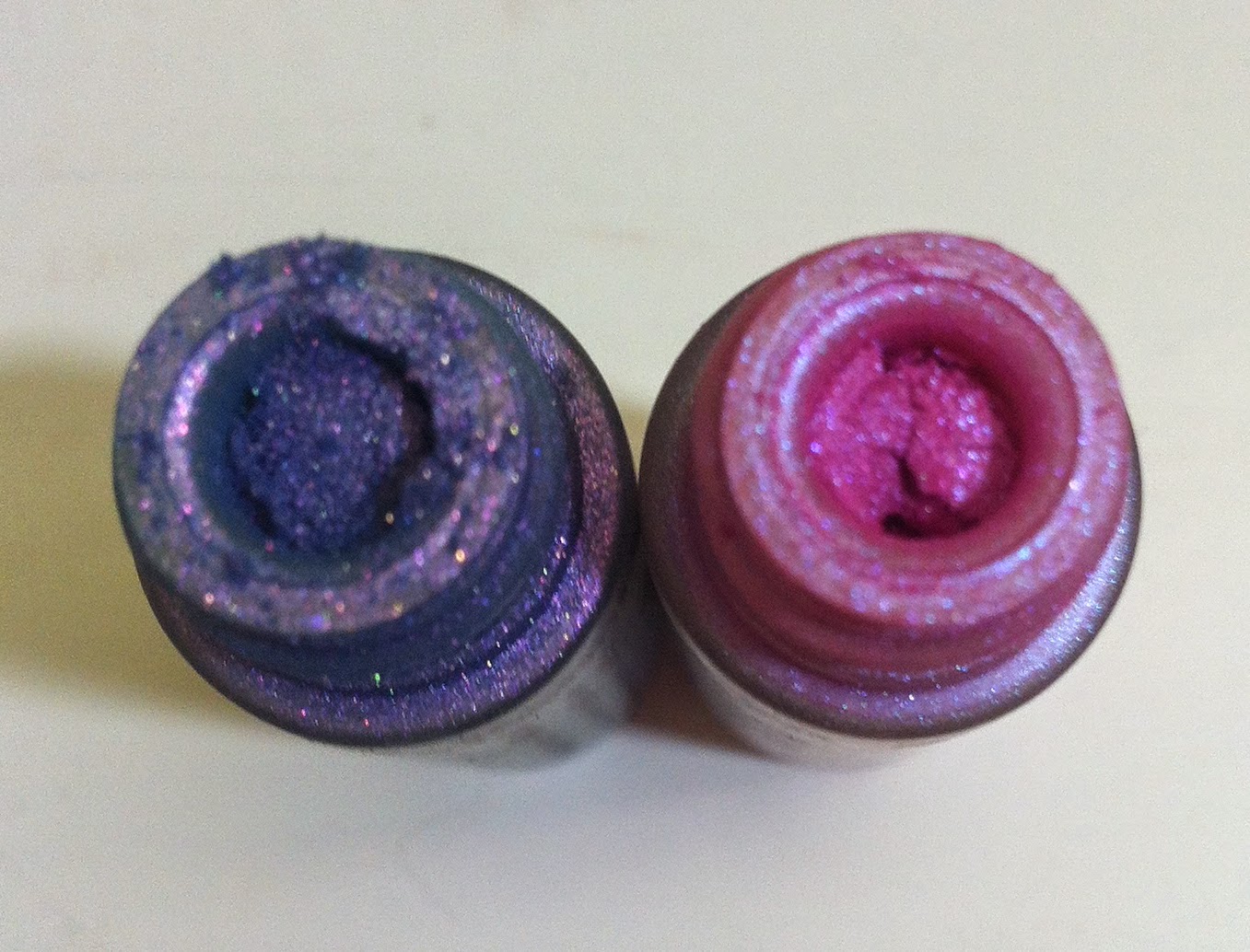 I can't find the name of either of these anywhere on the package.  It's possible they had stickers on the bottom of the tube that fell off long ago.  I'm pretty sure I had more of these, but I suspect they were nabbed by my sister.

I haven't been swatching or reviewing any of the "Throwback Thursday" items because many, if not all, are long discontinued, and I didn't think it would be helpful (or fair) for me to do so.  Would you like me to, though?
Posted by Ingrid at 1:18 PM 10 comments:

Silver Sun seems like kind of an odd name for a "midtone dirty sea foam green" (MAC's description). It's a gorgeous color no matter what the name. 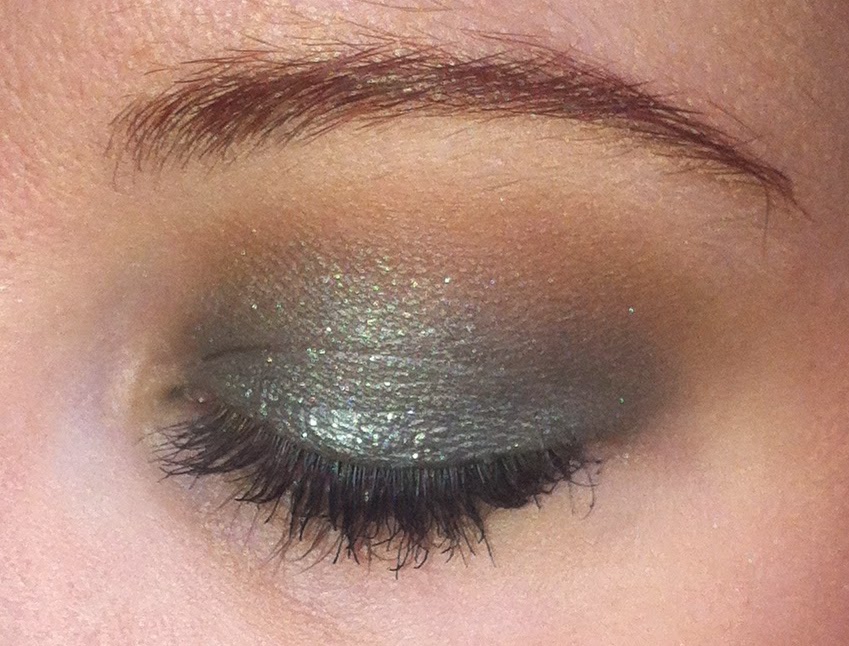 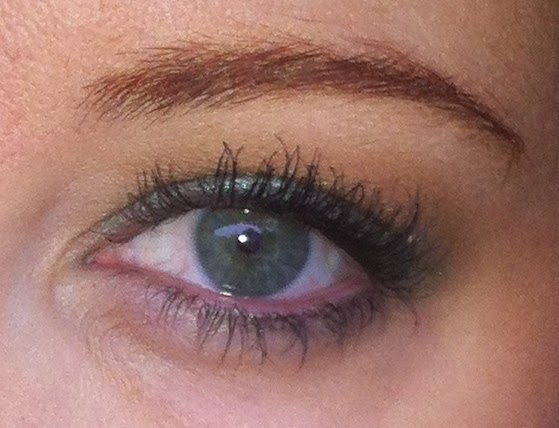 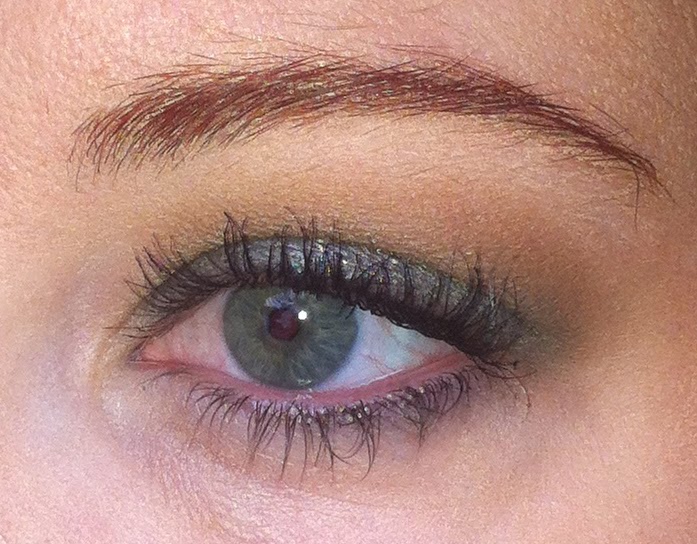 Quite a simple look, but pretty I think.
Posted by Ingrid at 3:06 PM 10 comments:

Some of the irises I planted in my garden last fall have bloomed.  Here are the four that bloomed so far:


"Place Your Bets" got knocked over and chomped by someone...

I was able to save the bloom that was chomped off, and I put it in some water, and it lasted a few days.

We have several other irises, but none of them bloomed or even have buds.  I think bloom time is over for them, so I guess we have to wait until next year to see the flowers.  I'm wondering if they are in too much shade or if I planted them wrong.  They are growing well and have lots of leaves, but no flowers...

Have a wonderful weekend!
Posted by Ingrid at 2:16 PM 4 comments:

Look what I got my hands on! 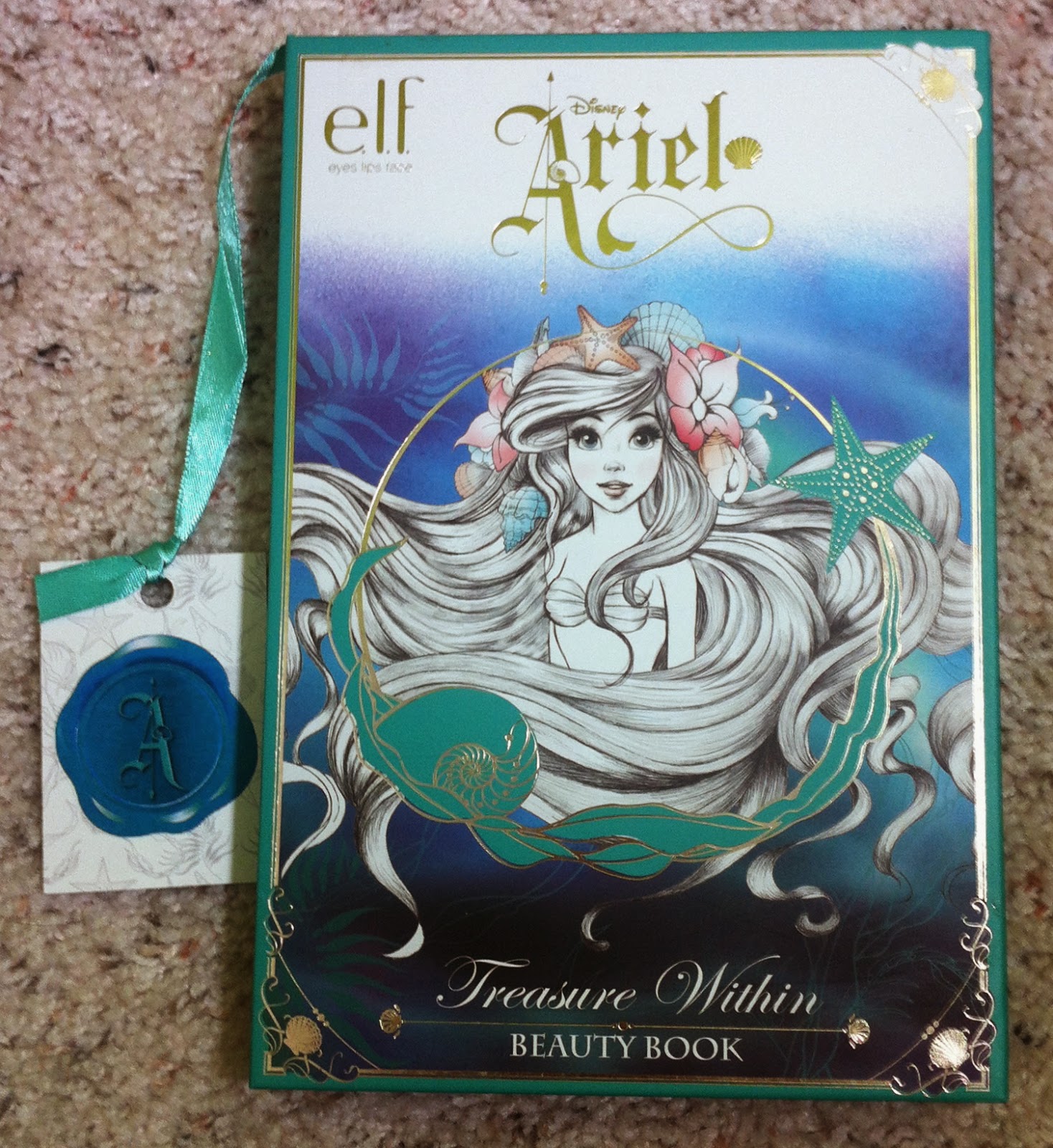 I'm such a sucker for Ariel stuff.  She is my favorite Disney princess.  I have Ariel t-shirts, pajamas, the fancy Diamond Edition Blu-Ray DVD combo pack of the film, a gorgeous Ariel mug, of course the Sephora Ariel Storylook palette, and now the E.L.F. Ariel Treasure Within Beauty Book.  I have also been told by more than one little kid that I have red hair "like Ariel" (yes, it's out of a box, but still...).

After first seeing this collection on Nouveau Cheap, I knew I was going to have to track down the face palette.  I considered buying it online as soon as it showed up on drugstore.com and walgreens.com, but by the time I had decided to do so, it had sold out (well, drugstore.com has it on backorder).  Sheesh.  Worse than a limited edition MAC collection.  Anyhow, after looking up on walgreens.com what stores supposedly had it in stock, I did some driving and was able to find it!  The store also had the brush set, but I decided against it, because, with the exception of the shader eyeshadow brush, they didn't look like brushes I would really use.  The crystals on the handles and the little carrying case were cute, though. 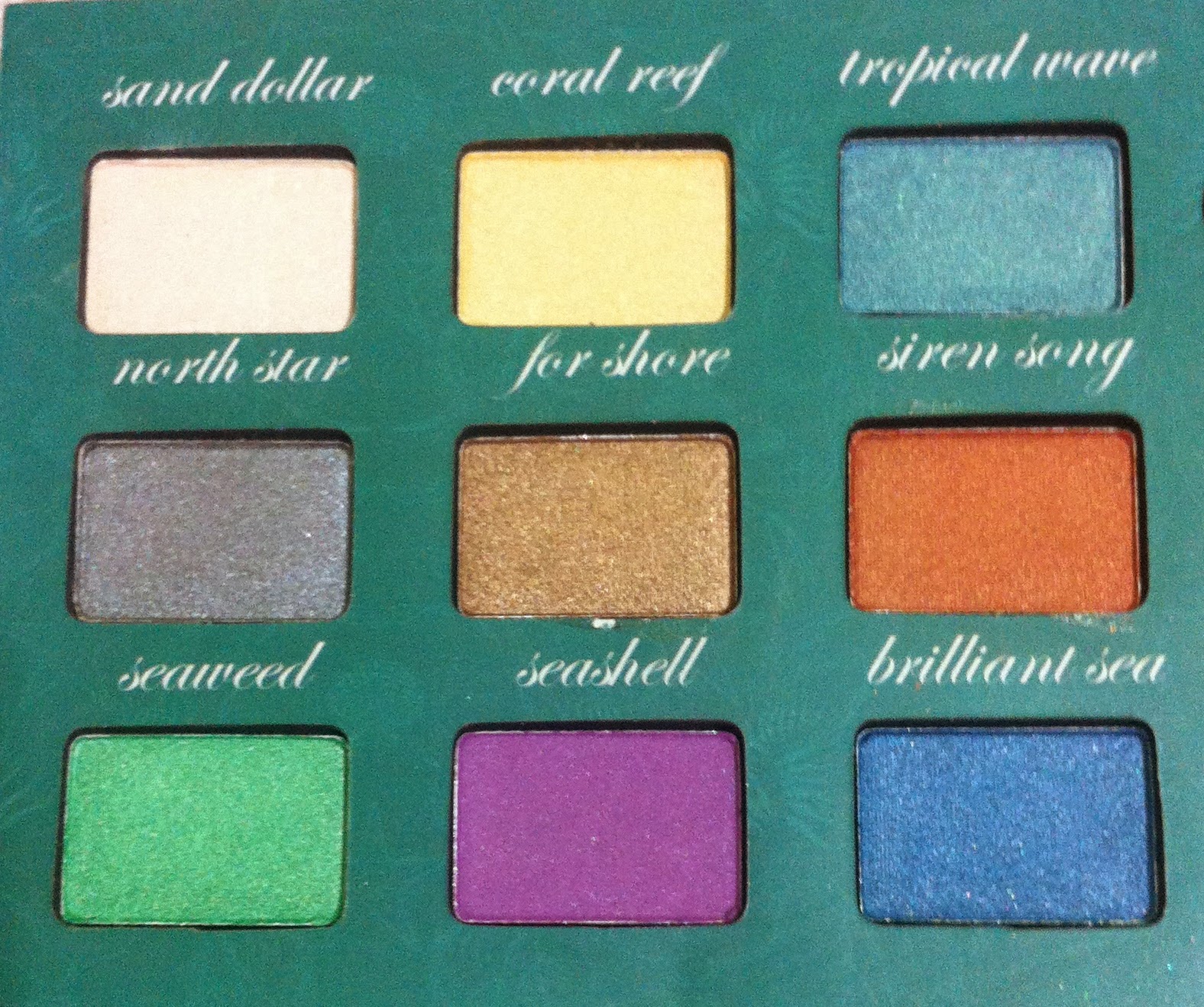 The shadows are on the sheer side, but pack a little more punch over a primer.  The only matte shade is the purple called "Seashell".

Swatches dry, with no primer:


The bronzers are fairly dark, have a little sheen to them, and give lots of color. 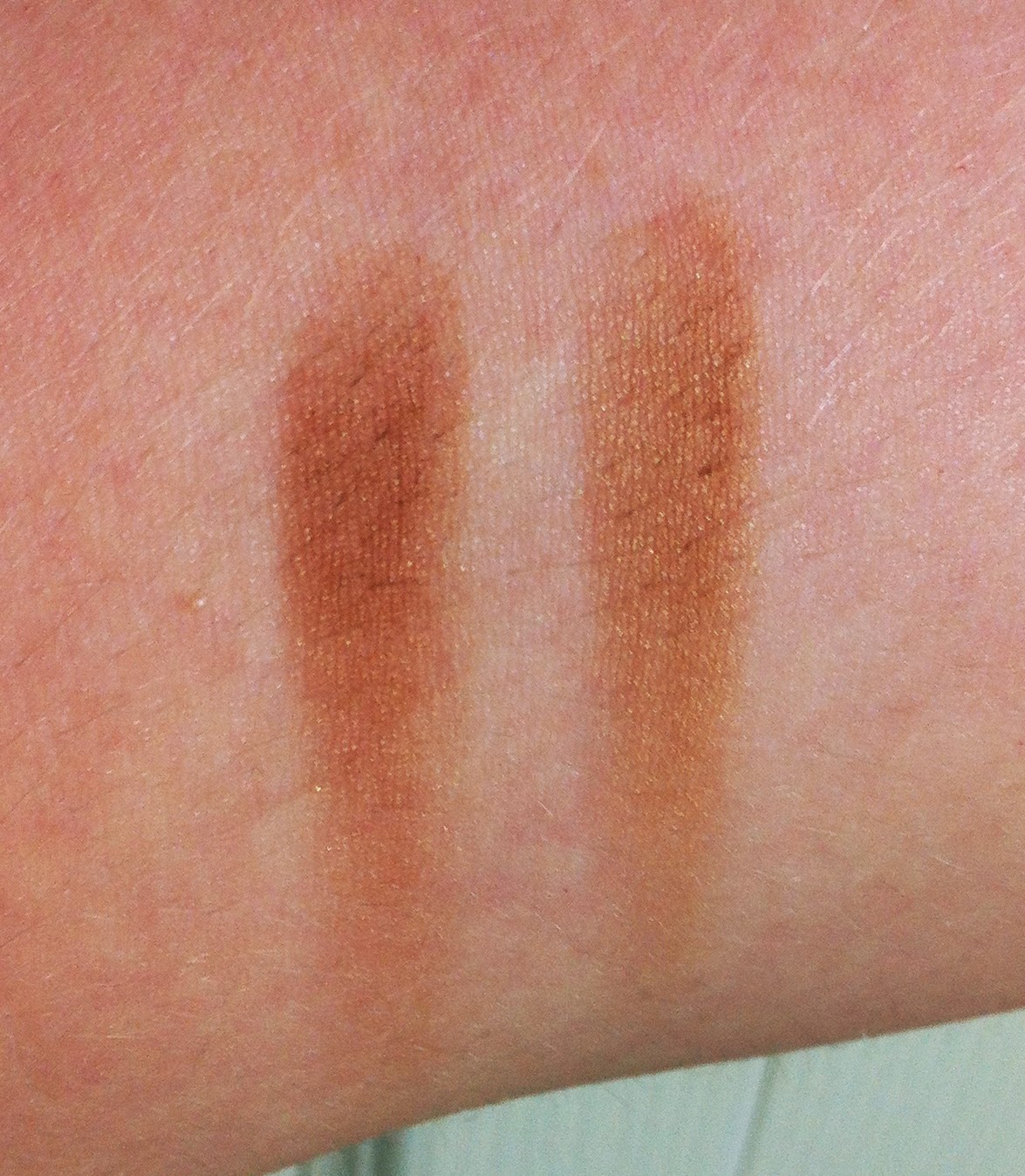 The lipgloss is decently pigmented for a gloss, isn't sticky, and smells and tastes sweet. 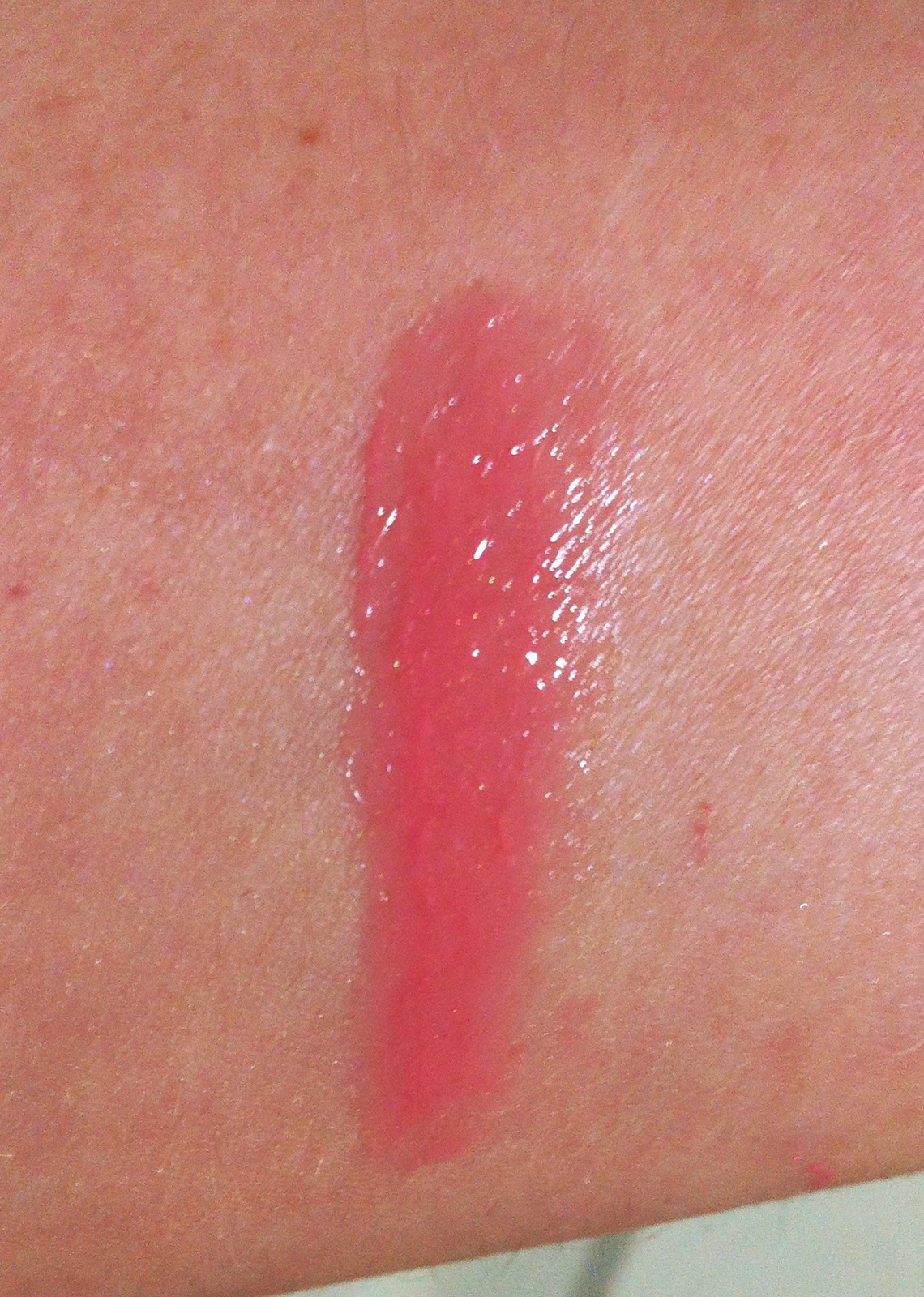 The eyeshadow brush is quite nice and soft.  It is better than the brush that came with the Maleficent eyeshadow set from last fall. Part of me wishes Disney had been more faithful to the Hans Christian Andersen fairy tale and kept the story a tragedy with the little mermaid throwing herself into the sea because she can't bear to kill the prince she loves and then transforming into seafoam and then becoming a spirit.  Quite beautiful, but maybe a little much for the traditional Disney audience.
Posted by Ingrid at 1:39 PM 12 comments: