A few weeks ago, I had a little time in Chicago with my parents and my sister.  My husband couldn't come with because he was takin' care of business.  I took a million photos, and I thought I'd share some (too many) of them with you guys.  I put most of the photos in collages (fun with picmonkey!) so I could show you more of them without making you scroll down the page for the next three days.

Day 1 -- The trip commenced on Wednesday.  I took the train from Detroit to Chicago.  And I rode business class.  Swanky.  They give you a free New York Times newspaper in business class.  My train trip was supposed to take about 6 hours, but it ended up being about 7.5. 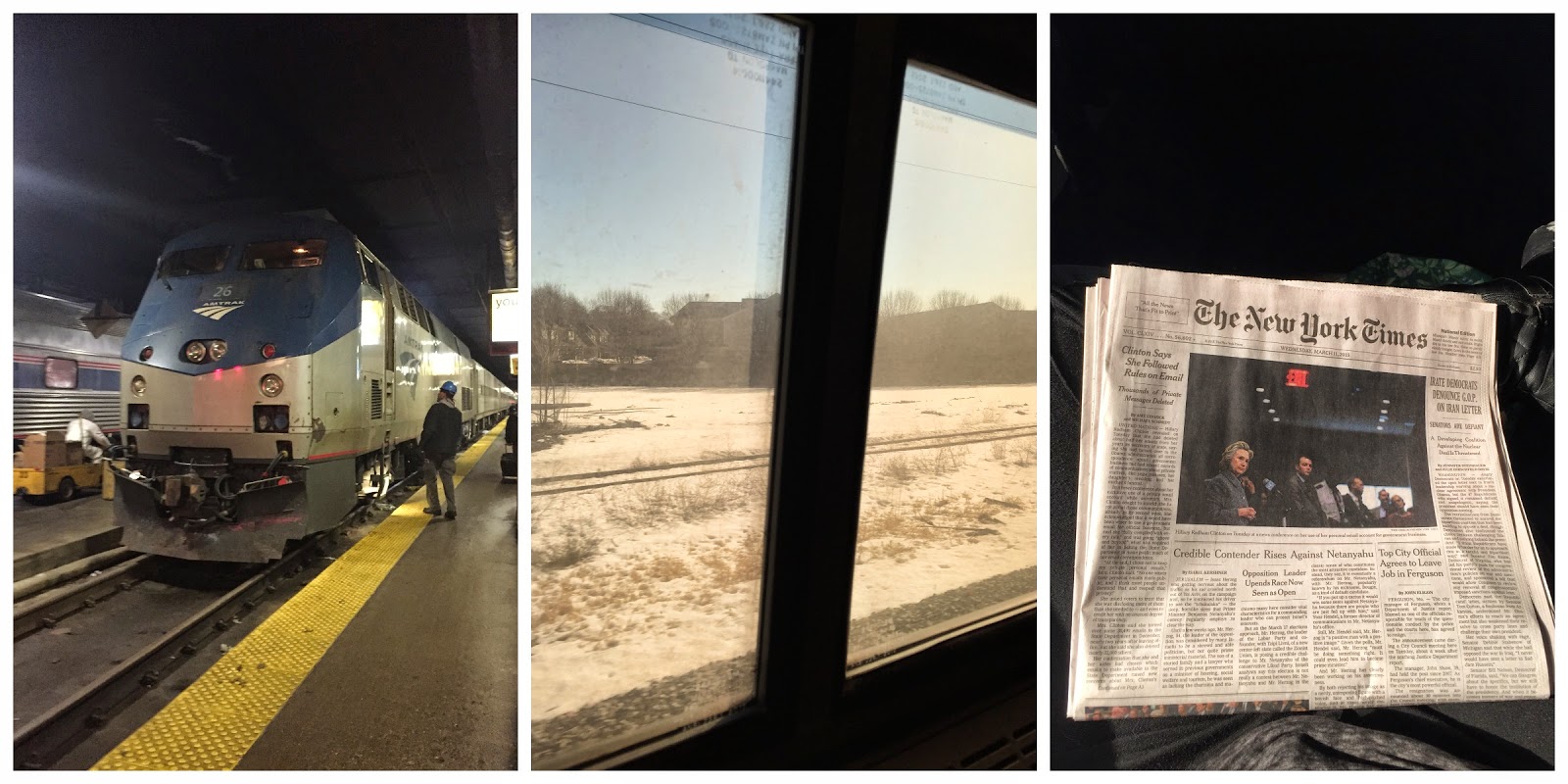 After we all arrived Wednesday afternoon/evening, we had dinner at the Russian Tea Time restaurant.  I had Beef Stroganoff (they served me the most gigantic portion, of which I ate maybe a third), my parents enjoyed some cheese blintzes, and my mom had some tea served in a cute little tea pot.

My sister and mom each tried a flight of vodka, and did the proper sniff the bread pre-drink, as well as eat a pickle post drink. 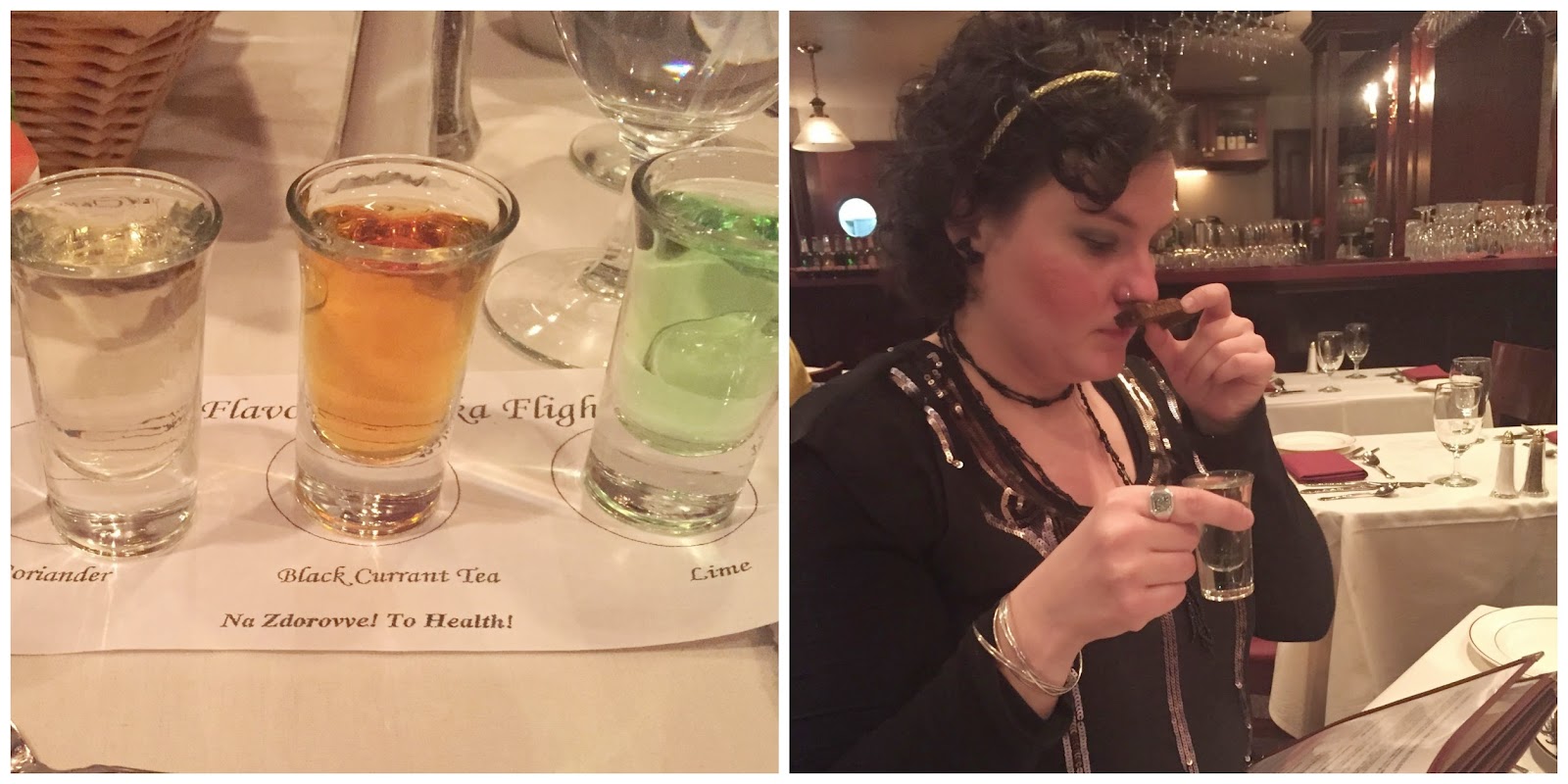 Day 2: morning -- On Thursday morning, we spent some time at the Sephora on State Street.  I knew I wanted to spend some money there, so I had a few things in my basket when my dad walked up to me and handed me his credit card and said "Don't lose it."  Ummmm really?  I was already planning on purchasing the NARS Dual-Intensity Eyeshadow Palette (Sam from Kiss My Sparkle convinced me that I needed it), a Make Up For Ever lip liner, and the NARS Audacious Lipstick in Brigitte.  Because my dad was treating and was cool with it, I also decided to nab a NARS Dual-Intensity blush duo.  I stood in front of the display for probably 10 minutes trying to decide between Fervor, Adoration, and Panic.  I decided on Panic, which you see below.  My mom and sister also picked up some various different things including the Bare Minerals Complexion Rescue tinted moisturizer (mom) and some Sephora brand products (sister).  My dad started chatting with the woman who was checking us out, which cracked me up because he is constantly telling me (jokingly, I think) to not talk to strangers.  So, yeah.  Thanks daddy-o! 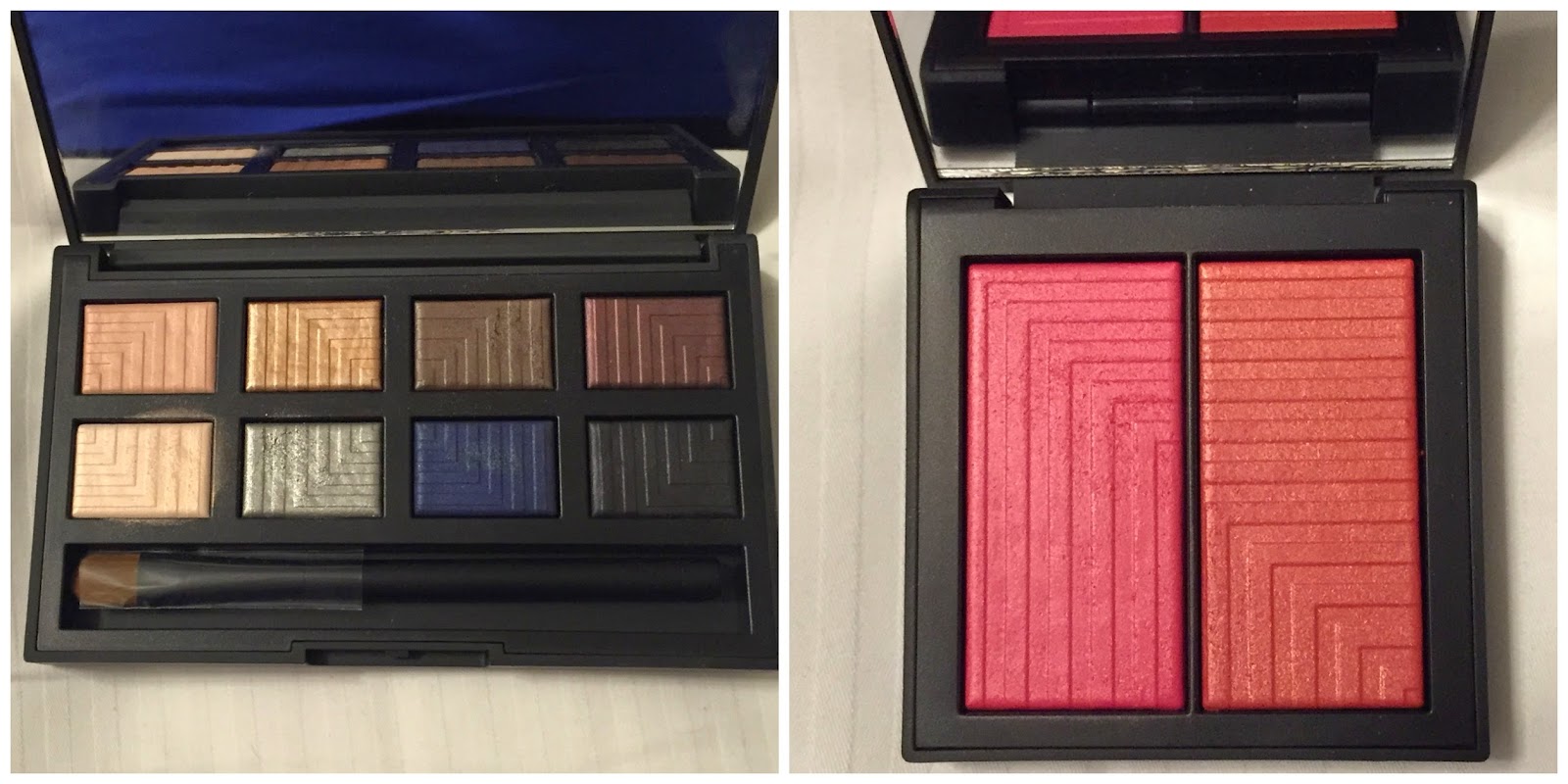 Day 2 -- afternoon: After the epic Sephora trip in the morning, my sister and I attended "The Passenger" by Mieczyslaw Weinberg at the Civic Opera House, performed by the Lyric Opera of Chicago.  It was amazing. AMAZING.  The music is haunting, and the story is heartbreaking -- it has to do with a female guard and her prisoner in Auschwitz, and how the guard thinks she sees the prisoner (who she thought was killed) on the cruise ship on which she is vacationing.  There's more to it than that, but that's the main storyline.  The production recreated scenes from the concentration camp, and many of the female prisoners had shaved heads or very short hair.  It made me cry and cry.  I almost started sobbing at the end.  I'm actually tearing up writing this.  Oddly enough, the Michigan Opera Theater will be putting on a production of their own next fall, so it will be interesting to compare productions.  I'm excited to see it again!


Here is a great photo of me and my sister.  I love this picture for two reasons: my sister is ridiculously cute, and the guy in the background is already napping.  And he has some earphones in.  Actually, so does the dude next to him.  What is that about? 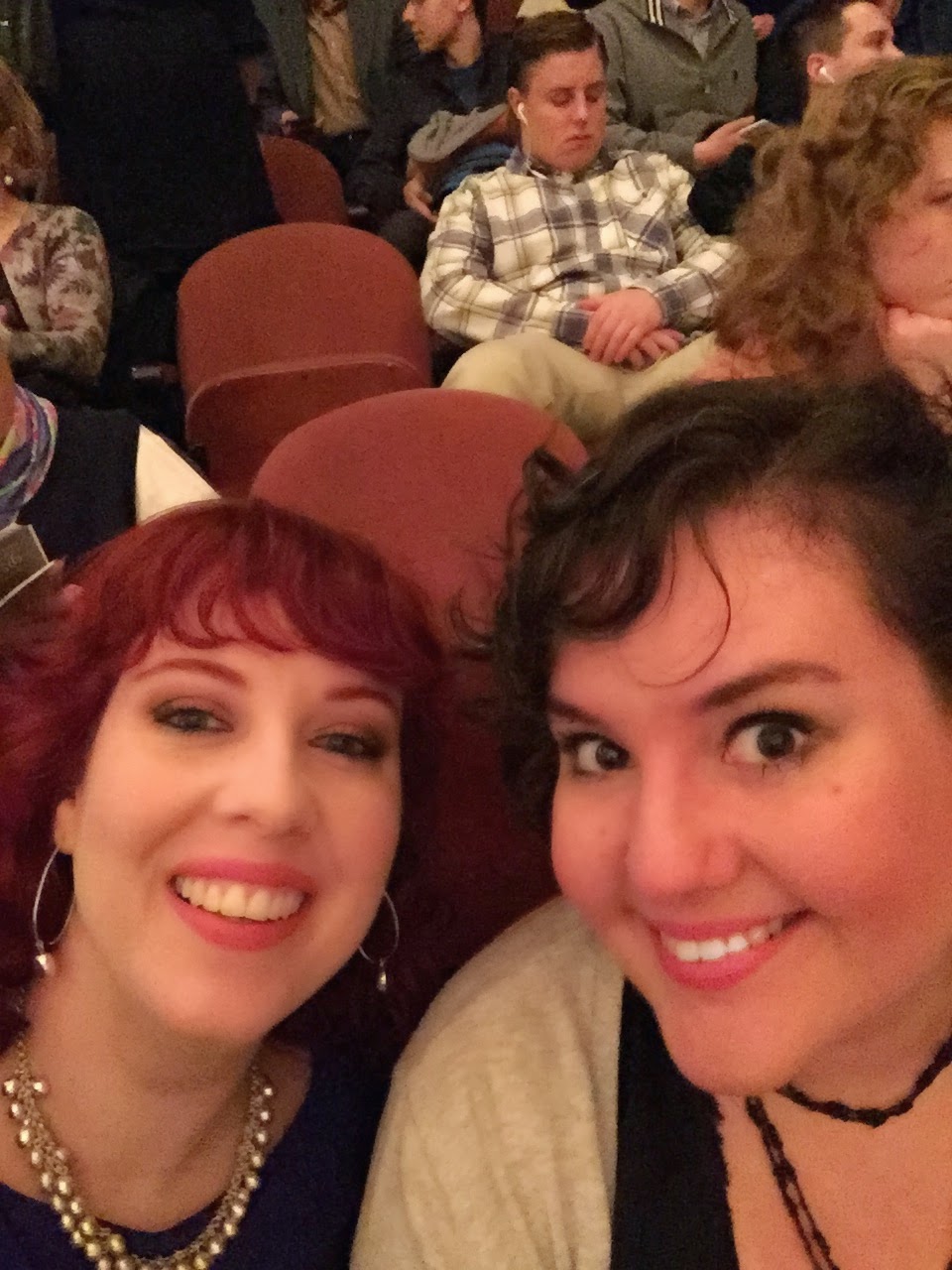 Day 2 -- evening: Thursday evening, my parents, my sister, and I attended a Chicago Symphony Orchestra concert.  All of the pieces performed were by French composers.  I don't think I could pick a favorite one.  It was all marvelous.  I would be happy to return to Chicago just to hear the Chicago Symphony Orchestra perform.  Two of the pieces (the D'Indy and the Franck) featured Louis Lorte on the piano, who was incredibly fun to watch.  I've forgotten how entertaining pianists can be when they perform.  Ravel's "Daphnis and Chloe" has a rather famous flute solo, which I learned way back in high school when I was a pretty serious flute player.  Surprisingly, I never played it as beautifully as the flautist we heard that evening.  ;)  :p


We were able to talk one of the ushers into talking a picture of all four of us.  She did a great job! 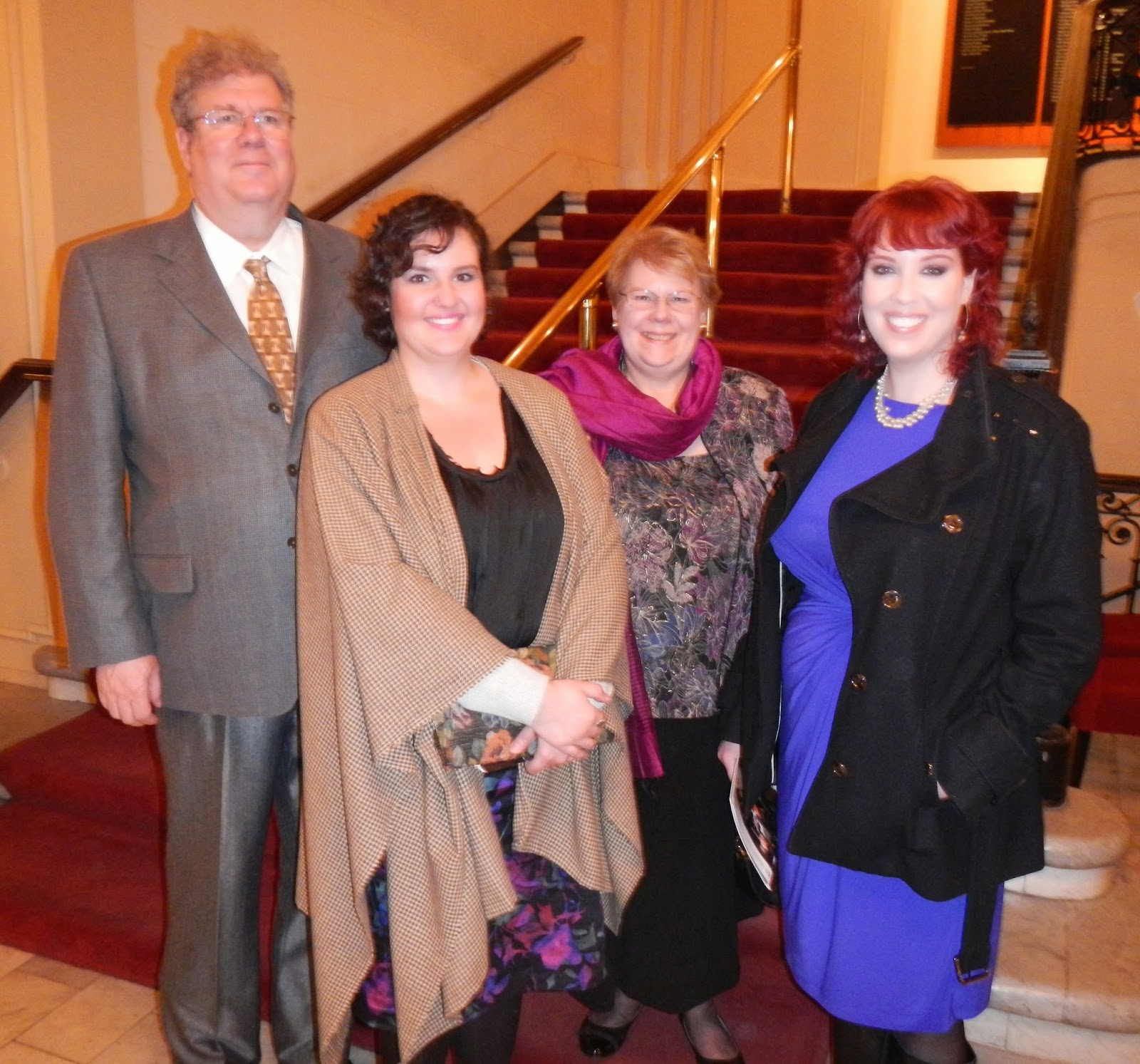 Day 3 -- all day basically: On Friday, we went to the Field Museum of Natural History.  They had a special Viking exhibit that we visited.


Many of the artifacts that the Norse/Vikings created were very finely decorated and ornate.  They were also fond of keys.  The lady of the house attached her keys to her belt, so they were on display as a sign of status. Locking stuff up was also important.  The penalty for stealing something that had been locked up was stiffer that that of stealing something that wasn't protected by a lock.


Among other things I learned: the word Viking was not originally a noun -- it was a verb, and it described a trip or raid.  So one would "go on a Viking."  And: Viking helmets did not have horns.  That was invented by Richard Wagner and popularized by his operas. 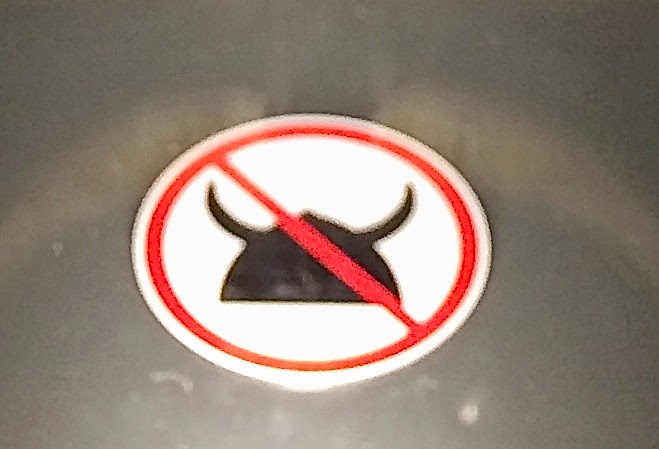 We also visited with Sue, the largest, most complete, and best-preserved Tyrannosaurus Rex in the world.


We also viewed two 3-D films, one about ancient Egypt, and one about the Galapagos Islands.

Then, my sister and I headed over to the gem exhibit, where I took a whooole lot of photos.


My favorite piece from the gem exhibit was an Imperial Topaz pendant.  It looks like it's on fire!


And, of course I had to see the fossils of long extinct beasts.


After the visit to the Field Museum, we had a leisurely dinner at the Italian restaurant a couple of doors down from the Hotel Allegro where we were staying.  We then watched the Michigan State basketball team play in the Big Ten Tournament in the hotel (no -- they didn't play the game in the hotel, we went back to the hotel to watch the game), which was fun because they beat Ohio State.

The Cadillac Palace next to the Allegro was featuring a show by "The Illusionists", a group of seven magicians/illusionists.  We bumped into a few of them walking into the Allegro and discovered that one of them was staying on the same floor as we were.  My dad pointed them out to us, and kind of hurried into the hotel so he could ride in the elevator with them.  My mom, sister, and I were being a little pokey, so we missed out on that.  My dad is a fan of magic, so he felt the need to chat with a couple of them.   He told us later that he talked to them in the elevator, and told them that he saw a dude escape from a straight jacket at the Blueberry Festival a while back.  I obviously wasnt there to see their response to this story, but I hope it amused them. 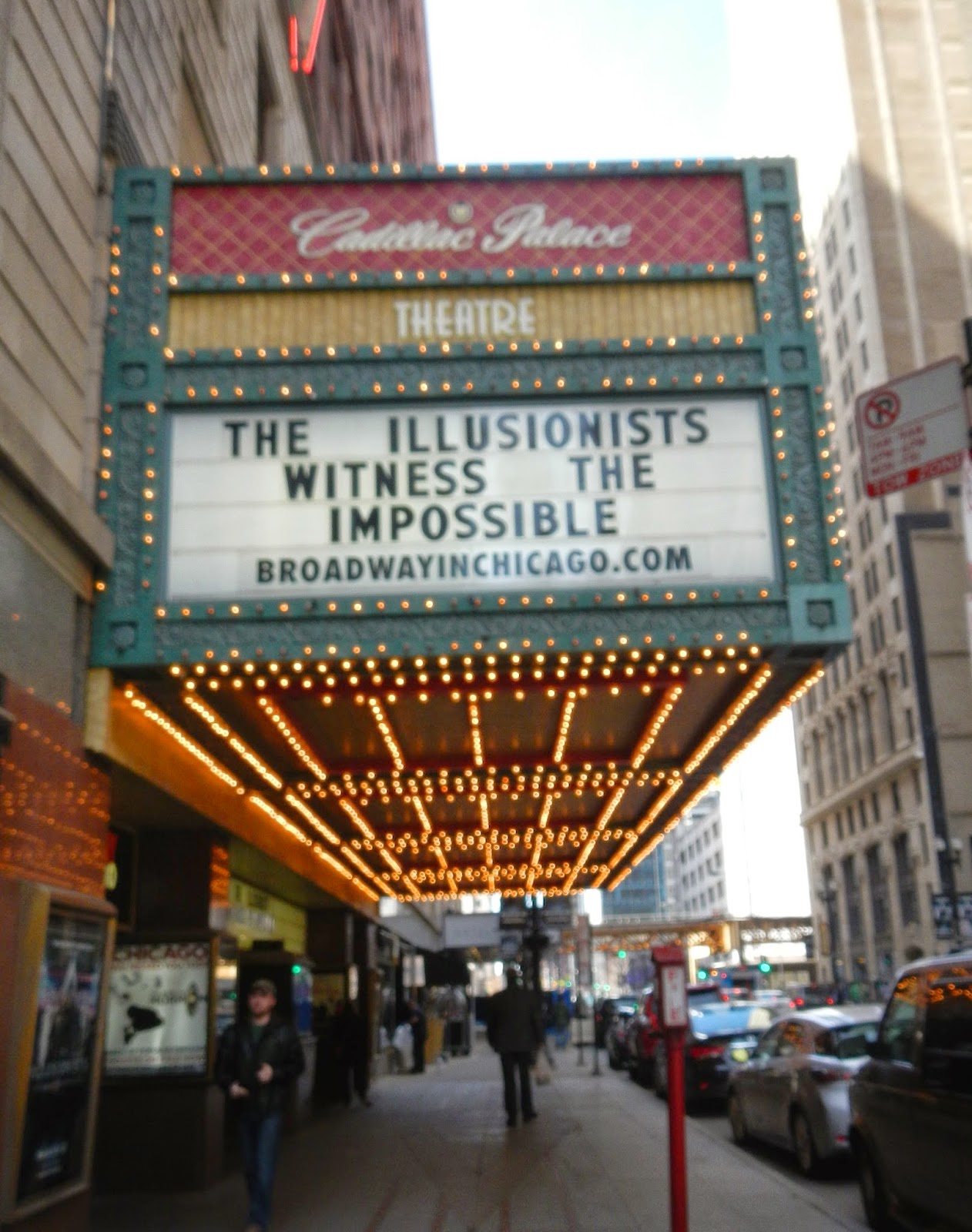 Okay.  So that was days 1-3.  Stay tuned for a post on Day 4/Saturday's shenanigans tomorrow!
Posted by Ingrid at 7:39 PM