Hey!  Happy July!  A good way to start off the month is with some haulage, right?

So, it finally happened.  I jumped on the Makeup Geek bandwagon.  You knew it was going to happen sooner or later.  I bought a Makeup Geek blush last fall (Secret Admirer - a lavender shade), but didn't buy any eyeshadows for some inexplicable reason.  Well, I finally decided I needed some.

Makeup Geek is an independently owned company based in California.  It was started by Marlena, who is a YouTube beauty "guru".  It seems like everybody has some of her shadows (especially peeps in the blogging/youtubing world).  I'm a bit of a sucker for hyped up stuff.  Yep, I'm okay admitting that. 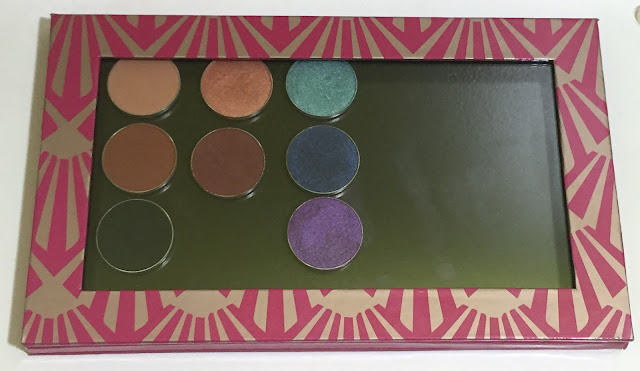 I bought one of the exclusive Z Palettes to put my new eyeshadows in, 'cause I don't have any empty fillable type palettes, so I needed one.  I think it's kind of cute, with the pink with gold sunburst pattern.  Kind of art deco-y, or something.


I tried to choose shades that seem really popular, raved about, unique, and different from other shadows I already own.

My descriptions of the colors are terrible, so here are some swatches (no primer):


Mermaid and Cosmopolitan are rather incredible.  They have the same texture as the two foiled shadows (Center Stage and Masquerade).  Oddly, Corrupt, while very black, feels much drier and stiffer.  Maybe the specific batch mine came from was different than others.

My favorites are Cosmopolitan, Mermaid, and Masquerade (shimmery and colorful!), as well as Bitten, which seems like an unusual shade.

I am really pleased with all of the shadows I bought.  I have a few (okay, several) more I would like to purchase.  Which will most likely happen soon...

Do you own any Makeup Geek eyeshadows?  Any recommendations?

P.S.  Having a magnetized palette is pretty fun.  You can move the shadows around and make pretty designs with them.  (I'm easily amused, I guess.)

Have a wonderful day, and for my Canadian friends, have a happy Canada Day!
Posted by Ingrid at 6:54 PM